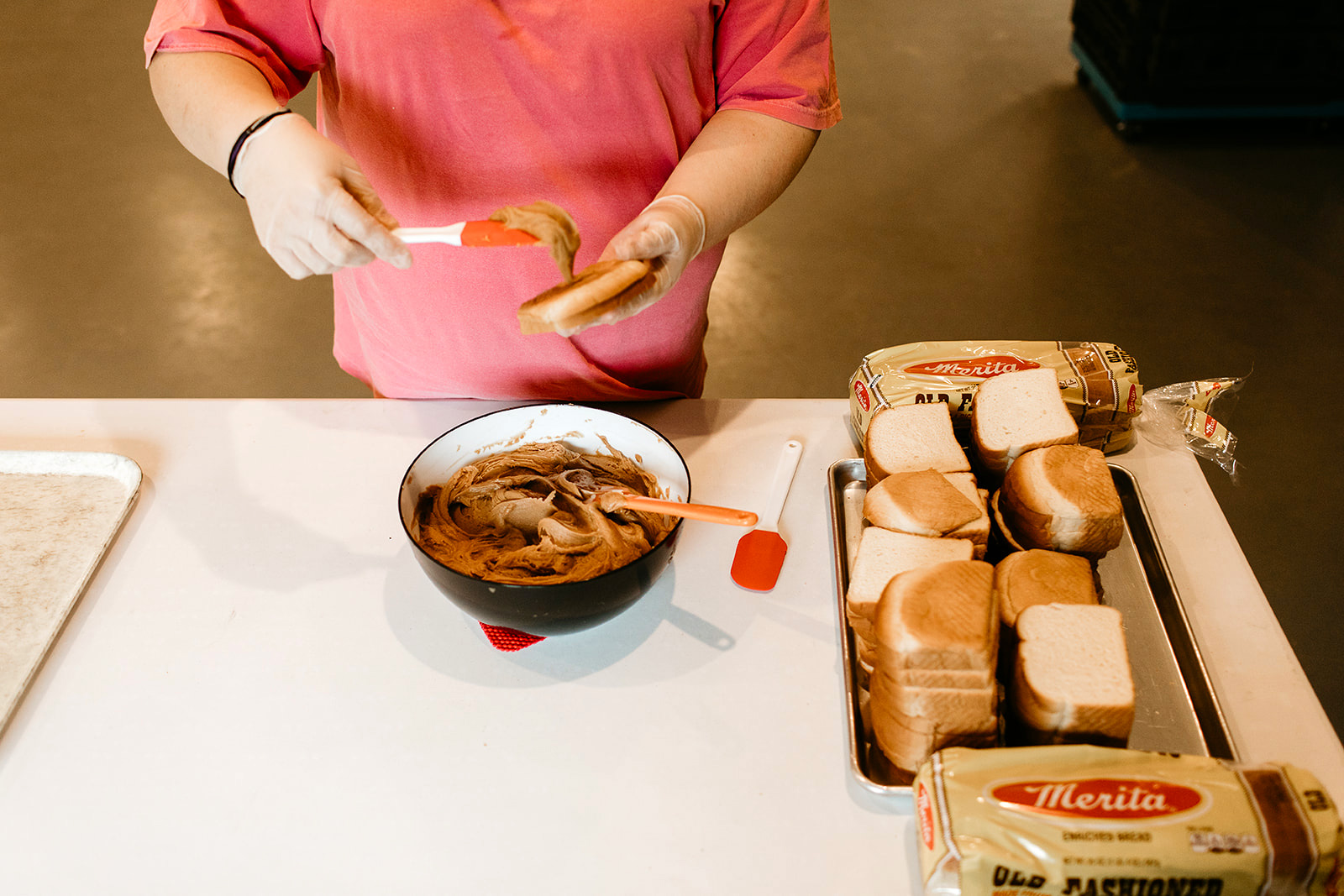 Power in a Peanut Butter Sandwich

A few years ago Lajuanta Mattox went on a mission trip to Puerto Rico that left her feeling discouraged. After seeing the overwhelming conditions in some of the impoverished neighborhoods, she wondered if she was even making an impact. Her presence there helped for a moment but she knew that as soon as she returned to her comfortable life in America, everything in Puerto Rico would backslide into the place it was before. Lajuanta said, “I remember asking why I was there and then I heard the Lord whisper to my heart, ‘Remember what you saw? Your community can be the same.’”

Lajuanta eagerly went home to love on her community with new eyes to truly see them. She and a few others gathered to make some meals and went door to door passing them out to whoever was hungry. They spent a beautiful afternoon loving on strangers in their own homes but Lajuanta still felt a tug on her heart. “It was all great but it was just a one time event. The one thing I have learned more than anything is to be consistent in your love. Be present. So many of these children have people in and out of their lives every day making and breaking promises. The only way we will truly impact a community is by continuing to show up for them,” she said.

When you walk through the doors of Jesus and Jam now, all social norms dissipate. Every Saturday morning the doors are open to anyone who wants to help and all are immediately welcomed regardless of where they came from. The air is filled with the life giving sound of laughter and chatter between all ages, races, social statuses and walks of life. “Division is everywhere… The haves and the have nots, the rich and the poor, the black and the white…all kinds of different divisions…but here we are one. Love unites us and I believe in my heart that this is what God intended the church to look like. There is nothing here to divide us and it is the most beautiful thing,” Lajuanta said with joyful tears filling her eyes.

Each person, young and old, worked together like a well oiled, mission minded, fun having machine. A couple of older women dumped peanut butter into bowls and began spreading it on the bread while a few middle aged men set up brown paper bags to be filled. Children skipped around with juices in their hands and cheerfully plopped them in the brown paper bags as someone followed behind to make sure none were missed. In a matter of minutes about 900 bags were filled with a sandwiches, a few snacks donated from the food pantry and juice boxes. The bags were then loaded up into vans patiently waiting to be handed out to hungry bellies.

Lajuanta sat in the back of the van with the doors open and her feet dangling as it slowly rolled its way through the usual route. As the neon yellow van pulled up to the first neighborhood, about a dozen expectantly waiting children came running as fast as they could towards it. When they arrived panting and giggling, Mrs. Lajuanta was sure to take the time to speak to each one. As they conversed there was a light in their eyes that made it evident that they shared a mutual love for one another.

A little girl around seven years old asked for 8 bags. When she was asked why she needed that many she said, “Well, it’s me and my three brothers. That will be enough for us to have food for lunch and dinner until we go back to school.” And just like that, childhood hunger had big brown eyes and could no longer be just a statistic.

Each child, elder and individual with special needs that were handed a meal that day were also given a nice helping of love. A puffy eyed toddler in her pull-up waddled up to the van without a word. A bag of food was extended out to her, but she looked past it and held up her little hands. Lajuanta stopped everything she was doing to pick her up and hold her while silently rubbing her back. Time seemed to stop as they embraced each other for as long as that little girl needed. After a few minutes of hugging, the toddler was ready to reach out for the bag. Lajuanta set her down and watched her softly smile and toddle home. “Jesus and Jam has nothing to do with a sandwich,” Lajuanta said as she hit the van to signal the driver to start moving again.

Jesus and Jam is constantly looking for ways to expand their love. They have recently built their own building, purchased a new delivery van, and are completely debt free! “This place is a miracle! We had no money and people came out of seemingly nowhere to donate. Here we are now, in a brand new building that is completely paid for. There isn’t a day that goes by that I am not in awe of God. You can just feel the love in this place,” she smiled.

Over the last five years, Jesus and Jam has grown into something immeasurably more than anyone could have thought, and this is just the beginning. They are currently working on a community garden to grow fresh produce for families who can’t always afford it. They are in the process of handing out food boxes for the elderly shut-ins who are unable to leave their homes to go grocery shopping. They are also planning to launch an after school program which is something Lajuanta is especially passionate about. “If we want gangs, drugs, human trafficking and several other similar problems to stop, we have to go to the source,” she says. “I wont say that these problems will all go away, but the issues wouldn’t be as prevalent. I just want these kids to have a chance at life and we will do whatever we can to give them that. We have to give them the love they need. They deserve that.”

Lajuanta’s vision for Jesus and Jam is for it to become a refuge for anyone who needs to be fed, both spiritually and physically. Whether it be through volunteering or receiving, she wants the doors to be open to ALL people. “When you tell me that someone has to qualify for a program it is not for us. You can be the richest kid in this town and still be lonely and hurt and devastated…money has nothing to do with that…they just need somebody to love them. They need to know someone cares. They are just as starving as anyone else,” she said. She also sees Jesus and Jam expanding to be bigger than just Homerville, Georgia. “I would have never dreamt that Jesus and Jam would grow this big this fast and there is no limit to where it could go. If I am called to expand farther I will not hesitate,” she said.

Jesus and Jam is proof that anyone can make a difference even with something as simple as a peanut butter sandwich. They aren’t only changing the lives of the hungry but they are bringing healing to every person volunteering their time to help.

Ways you can be involved!

Thank you for epically affecting our world!

Our desire is to sow love and reap positive change for our farmers, nation, and world.